Tales of the unexpected!

February 2022. Join us in congratulating South Ribble Tennis and Fitness Centre's very own Paul Walmsley, who has written a book! 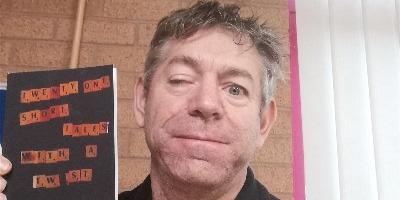 After all, two years ago he suffered a stroke - only for it to lead to him writing a book!

"In March 2020 I had an operation to remove a cyst from my brain," explains Paul, Senior Duty Manager at South Ribble Tennis and Fitness Centre.

"The operation took six-and-a-half hours and, as I came out of the anaesthetic, I then suffered a stroke.

"It caused a loss in movement to my left arm, affected my speech and more severely caused damage to a nerve in my eye. This caused me to have double vision which I still have today.

"Determined to get back on my feet and get my brain ticking over again, I challenged myself to write a book of short stories."

Quite a challenge indeed for someone who'd never written for other people before!

"I'd done the odd short story but not for public viewing - only for my own amusement," reveals Paul, 53, who has worked in leisure for the council since 1987.

Yet over the next nine months he set about crafting 'Twenty-One Short Tales With A Twist': a collection of fun, often heart-warming and occasionally thought-provoking stories of everyday folk - all with a surprise ending.

There's 'The Great British Fake Off' about rivals at a village baking competition; 'Lot 41' about a man obsessed with finding his fortune who finally discovers an item which will make him rich at a local auction; and 'The Greatest Mystery Tour of All' in which two strangers sat together on a mystery coach tour share a trip unlike no other... But where are they heading?

Paul says his story ideas "come from many sources" - not least personal experience.

"The Greatest Mystery Tour of All was inspired by a coach trip I organised back when I worked as a lifeguard at Leyland Leisure Centre.

"We took a group of children on a mystery tour and five minutes into the journey the driver asked me 'How do you get to Botany Bay?' - in effect blowing the surprise!

"Sometimes it's people you meet who trigger an idea, or it could be something so simple as something somebody says.

"In the case of the story 'Crash', I'd got one of those telephone calls that say 'our records show you have been involved in an accident that was not your fault', while the idea for 'Post-It Notes' was from a work colleague who used loads of them in the office.

"I also dream a lot and have often woken up with a new story in my head!

"Many of the stories can be read in under five minutes which is great for a quick pick me up and put me down read. The stories show that sometimes all is not what it seems. But isn't that just life?"

The self-published book is dedicated to wife Linda, who was a real rock for her husband through his ordeal.

"I could not have recovered as I did without her care, patience and love," Paul admits.

"I would also like to thank all the staff in ward 2B at Royal Preston Hospital for taking care of me in March 2020.

"I hope my story may give hope to stroke victims or people with visual challenges that things can get better with effort."

And having got a taste for being an author, Paul reveals work has already begun on a sequel.

"The last story of the book, '21 Sheds in May', has spurned a spin-off that I'm currently writing following the adventures of a recently-retired couple, Bert and Maureen.

"The book will be made up of 12 stories - one for each day of the month. For example, January's is titled 'A New Year's Revolution' while February's is 'A Valentine's Day Mascara'."